Premier Tours & Travel is an award-winning agency for leisure, luxury, and business tours and travel worldwide. Through our “Expertly Done” Travel Series, explore cultures, food, wine, and the arts enhanced by the knowledgeable, approachable insights of Premier’s hand-selected experts, such as

acclaimed Chef Bob Waggoner and Culinary & Lifestyle Influencer, Carrie Morrie. We are proud to partner with such experts to create bespoke itineraries to ensure a premier experience of a lifetime.

TOURS WITH CHEF BOB WAGGONER
Premier Tours & Travel is proud to partner with Chef Bob Waggoner, a culinary legend and Emmy award-winning personality, to create culinary tours throughout the world.

Exploring the Flavors of Provence From Nice, Vence, St. Paul de Vence, Avignon,  Aix en Provence, and Gordes … and the many picturesque villages in between, Chef Bob Waggoner will enliven your senses May 18-May 29, 2021, and September 7-18, 2021. Partake in wine tastings and olive oil tasting, gaze upon sunflowers and lavender fields, and experience unsurpassed culinary delights (with Chefs dinners and optional cooking experiences) throughout your 12-night trip through Provence.

Additional Exploring the Flavors of Provence is available with a local French chef on May 7-May 18, 2021.

Check out our feature story in Charleston Magazine about our September 2019 tour to Provence with Chef Bob Waggoner. 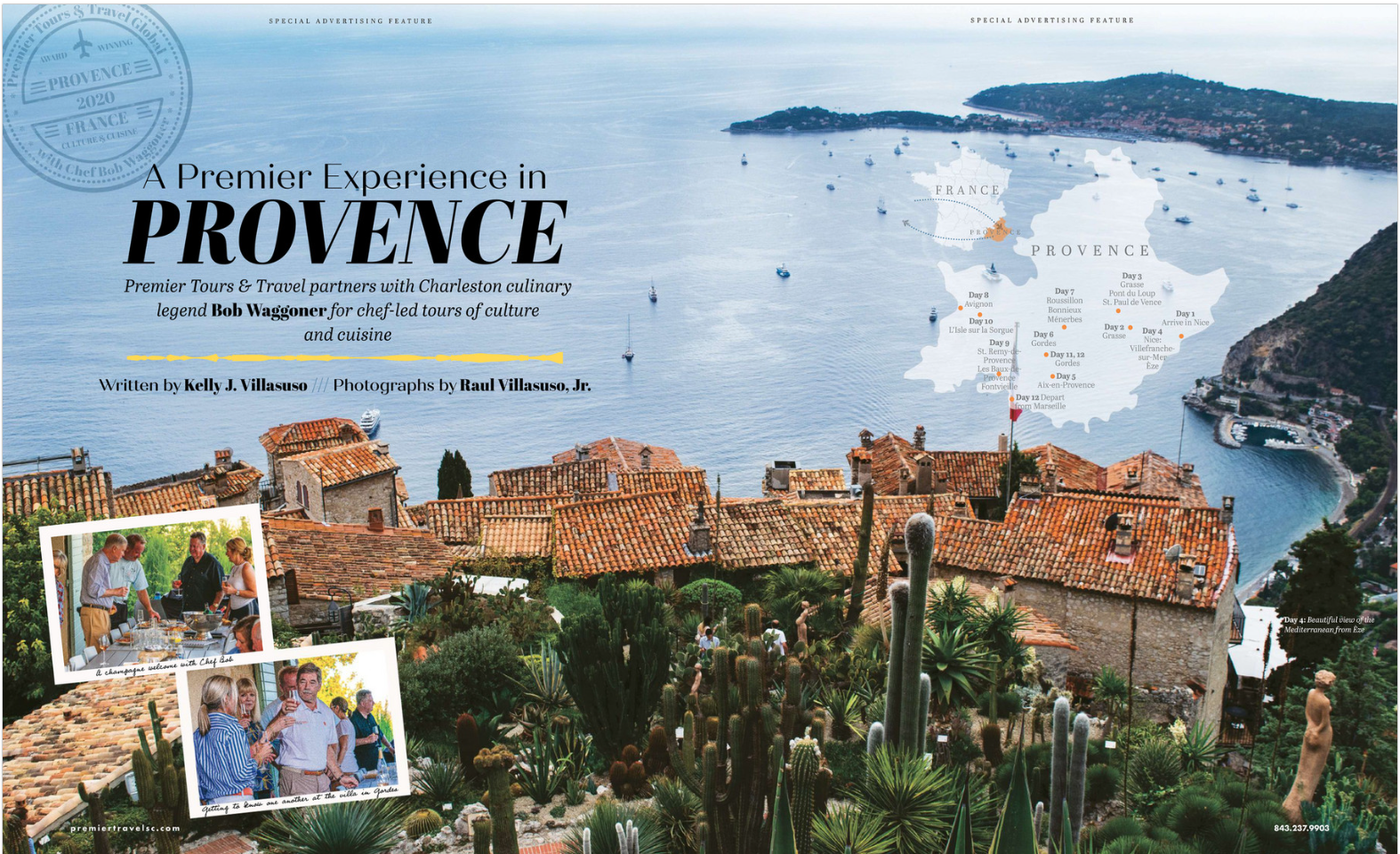 A Culinary Extravaganza in Bountiful Burgundy

It’s easy to see why travelers fall in love with Burgundy, France. It is the culinary heart of France and home to legendary vineyards with UNESCO World Heritage status. Burgundy in September, though, is even more stupendous because the harvest is in full swing. However, Burgundy with Chef Bob Waggoner will be unparalleled! Throughout the tour, you will experience the colorful, rich history — and all of the delectable epicurean delights — of this beguiling region, including Maçon, Tournus, Chalon-sur-Saône, Beaune, and Dijon, and walk in the footsteps of a younger Chef Bob Waggoner. His personal experience living in Burgundy for nearly 12 years — working alongside numerous Michelin-star chefs, securing his own spot as Chef de Cuisine at the two-star Michelin Le Vieux Moulin in Beaune, and being Knighted with the “L’Odre du Mérite Agricole” from the Government of France — will make this a trip you won’t soon forget … not to mention the exquisite, 5-Star Hotel Boscolo, the high-end country estate Chateau de Montsymond, and activities carefully curated by Premier Tours & Travel on this exclusive tour. You will also spend three nights in the capital of gastronomy, Lyon, in the Rhone region to round out your palette and tour. September 20-October 1, 2021  Learn more. 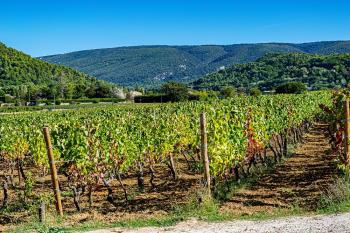 Traversing Tuscany on Chef-Led Culinary Adventures A once-in-a-lifetime tour of Tuscany's finest wine and epicurean offerings June 2-13, 2021 under the guidance of one of the most highly acclaimed chefs in the United States and France ... Chef Bob Waggoner. After traversing the villages and markets, enjoy two Chef dinners with Chef Bob, two Chef dinners with an acclaimed Tuscan Chef, and two collaboration Chef dinners. Learn more.

Additional Traversing Tuscany on Chef-Led Culinary Adventures are available with a local, renown Italian chef on April 23-May 4, 2021 and October 1-12, 2021.

Premier Tours & Travel is headed to Argentina you won’t want to miss experiencing this exclusive, bespoke, 5-star luxury tour. Premier Tours & Travel will lead you on a chef-led Argentinean cultural, viticultural, and culinary adventures throughout Buenos Aires and Mendoza, including renown wineries in the Maipú, Lujan de Cuyo, and Uco Valleys. Hand-selected luxury accommodations, such as The Vines Resort & Spa and Palacio Duhau – Park Hyatt Buenos Aires, as well as bespoke collaborative winery cooking experiences and Chef’s dinners — including an exclusive, collaborative Chef’s dinner with The Vines Resort & Spa’s Executive Chef Matias Mansilla with wine pairings by The Vines Resort & Spa’s Sommelier — will make this truly a Premier experience.  ​February 17 – February 27, 2021 and February 9-19, 2022 with an optional extention to Iguazú Falls, Argentina on February 27-29, 2021 and an optional extension to Iguazú Falls, Argentina or Santiago, Chile February 19-21, 2022. Learn more.

Additional Argentina: A 5-Star Chef-Led Tour of Food & Wine hosted by local Argentinian chefs is available in the shoulder season, May 5-15, 2021 with an optional extension May 15-17, 2021 to Iguazú Falls, Argentina. 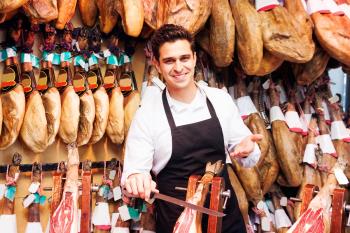 A Taste of Spain

Join Premier Tours & Travel for A Taste of Spain — a private, small group, chef-led cultural, historical, and epicurean tour throughout the Andalusian region and Madrid, Spain. From the hand-selected, private experiences, including the Guadalquivir river cruise, the Cinco Jutas Ibérico farm tour and tasting, the flamenco museum tour and show, the Royal Andalusian School of Equestrian Art demonstration, the Marquis-led tour of Virrey Laserna Palace, the Jerez de la Frontera sherry tasting, the LA Organic olive oil tasting, the guided tour of La Alhambra, and master chef-led paella class, to the guided, private walking or panoramic city tours in Seville, Ronda, Mijas, Marbella, and Madrid, your 11-night experience will surely quench your thirst for Spain. Only to be surpassed by the unique market and dining experiences with your personal chef. Truly a Premier experience! Our celebrity Chef Bob Waggoner will be hosting our April 6 – 17, 2021 departure. Learn more.

Suppers Outside the South With Carrie Morey Tour

On this custom-designed, multigenerational family adventure to Provence, France, you will be hosted by Carrie Morey, owner of Callie’s Hot Little Biscuit, mom of three girls, culinary entrepreneur, and lifestyle influencer. Carrie has helped Premier Tours & Travel carefully curate a fulfilling family vacation — with just the right blend of historical sites, cultural experiences, enrichment activities, and good old-fashioned fun — for her family and yours! Together with Carrie, we have addressed every detail on this 8-night tour, so all you must do is relax and enjoy each moment with your family. June 2021; Family travel.

*IMPORTANT INFORMATION: Itinerary subject to change. Premier Tours & Travel reserves the right to modify programs and itineraries (including arranged sightseeing, accommodations, dining experiences, aircraft, trains, vessels, and so forth) at any time due to unforeseen circumstances or circumstances beyond Premier Tours & Travel’s control. In the instance our Expert host cancels due to unforeseen circumstances, Premier Tours & Travel has the right to substitute another chef in such an emergency (timing allowed) and/or the tour will continue in its entirety. Every effort is made to operate our itineraries as planned but alterations may need to be made after the final itinerary has been issued. Airfare is not included. Wine is included as noted otherwise alcoholic beverages are the responsibility of each adult guest. Please refer to General Terms & Conditions/Key Items to Know Before You Leave Home via the footer. 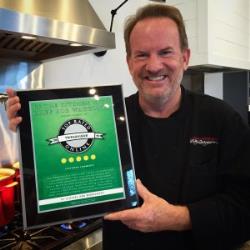 A California native, Chef Bob Waggoner received his formal training with Michael Roberts at Trumps in Los Angeles from 1981 to 1983, and later in France at a constellation of Michelin-rated restaurants with chefs Jacques Lameloise, Charles Barrier, Pierre Gagnaire, Gerard Boyer and Mark Meneau. At 23, he took on his first chef position at the private club “Members” in Caracas, Venezuela. Chef Bob Waggoner returned to France at age 24 to become chef of the Hotel de la Poste in Avallon for three years. Then, in 1988 at age 26, in the town of Moneteau in Burgundy, he became the first American chef to own his own restaurant in France, the much acclaimed Le Monte Cristo. He is one of the few Americans to be Knighted with the “l’Odre du Mérite Agricole” from the Government of France. In 1991, Waggoner was offered the opportunity of Chef de Cuisine with Chef Jean-Pierre Silva, the two star Michelin, at Le Vieux Moulin in Beaune, France. After 11 years in France, he returned to the States in 1993 to cook at the award-winning Turnberry Isle in Florida, before joining The Wild Boar in Nashville, where he earned the restaurant a coveted AAA Five-Diamond Award and the Grand Award from Wine Spectator. He finally found his way to Charleston where we was Executive Chef of Charleston Grill at Charleston Place for a dozen years. Every year Chef Bob was at the Charleston Grill, it was awarded AAA Four-Diamond and the Mobile Four-Star award, and in 2001 he was nominated four times for The Beard Foundation "Best Chef Southeast" award.

Always well regarded as a media-savvy chef, he won an Emmy for his television show “Off the Menu” with Turner South, and was the host of the PBS series "U Cook with Chef Bob" and "U Travel with Chef Bob." He is currently working with top country musicians in Nashville on the hit show "Sing for Your Supper." Now Chef Bob is moving on from his restaurant past, but he is certainly not leaving the kitchen. Drawing from the wealth of artisans in the Charleston area, from woodworkers to artists and cabinet makers, Chef Bob has created a stunning demonstration kitchen in downtown Charleston with reclaimed wood floors, a u-shaped marble countertop and even a Grand player piano. Despite the sophisticated surroundings, Chef Bob's cooking classes at In the Kitchen With Chef Bob Waggoner are relaxed and casual, and with his easy going nature he can teach anyone the culinary tips and techniques for "how it's done" in the finest restaurants.

Carrie Morey founded Callie’s Charleston Biscuits in 2005 with the goal of making the tender, buttery, made-by-hand biscuits of her mother accessible across the country. Over 15 years later, Callie’s Biscuits is widely recognized as an iconic Southern brand with national retail exposure and a cult following. Touted by Saveur, Food & Wine, Southern Living, The New York Times, Bake from Scratch, and Oprah among others, Carrie and her small team of bakers are keeping the tradition of Southern biscuit making alive. Callie’s Hot Little Biscuit – grab-and-go biscuit eateries - are Carrie’s latest tasty endeavor with 4 locations in Charleston, Atlanta, and Charlotte; as well as a new traveling food truck.  Carrie authored Callie’s Biscuits and Southern Traditions, a cookbook and narrative on entrepreneurship and life in the lowcountry. Carrie has appeared live on the NBC Today Show, The Martha Stewart Show, Fox & Friends, The Hallmark Channel, Top Chef and QVC and has been profiled numerous times by The Food Network and Cooking Channel. Her handmade biscuits, pimento cheeses, and other artisan goods have garnered 19 sofi™ awards from the Specialty Foods Association.  In addition to her role as owner at Callie’s Charleston Biscuits and Callie’s Hot Little Biscuits, Carrie operates an incubator, offering baking space along with mentoring to small artisan food businesses on location at Callie’s Charleston Biscuits’ bakery. She acts as a consultant to these entrepreneurs – helping them navigate everything from regulations to production and advising on marketing and growth strategies. Corporations, associations, and individuals frequently call on Carrie for speaking engagements and biscuit bootcamp retreats. 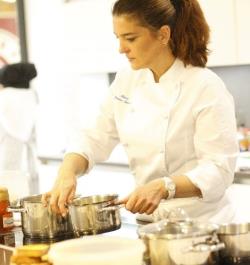 Chef Maria Jimenez Latorre is a renowned chef in Spain with a following throughout the country for her magnetic personality and culinary style. Her fondness for cooking began as a child— the daughter of a great gourmet and a great cook, she grew up between stoves. Her style was influenced by such renowned Spanish chefs as Segundo Alonso at The Paloma Restaurant in Madrid, Manuel Antón, and Juanjo López de la Tasquita de Enfrente of La Taberna Alegrías. Chef Jimenez has published two books, Best Salads and Magicians in the Kitchen, which is also her popular blog’s namesake:

She loves to explore local markets, particularly spice markets, and to find new places that surprise her with their cuisine, products, and/or wine—and to share those experiences with others. Chef Jimenez has participated as a judge in the first season of the popular Spanish television cooking program, "My Mother Cooks Better Than Yours.” She has been a lecturer in the European Parliament, belongs to the board of directors of ACYRE association of chefs and confectioners of Madrid, currently runs her own catering with Sergio Fernández, and teaches cooking courses for both professionals and amateurs.